The EFL Championship Play-off is a promising battle for the trophy. The Championship play-off final is known as the Richest game in football accumulating a whopping 170 million British pounds as prize money for the winner. As if that is not enough of a motivation, the two teams have scores to settle; Aston Villa wants to cement their recent history against their opponents while Derby County wants to make a statement where it matters. As 27th May approaches, the atmosphere at Wembley will be dictated by the team that can withstand pressure and has an organised midfield. If Aston Villa triumphs, it will send a warning shot to the Premier Leagues teams, while a win for Derby will be a boost for Frank Lampard’s resume. 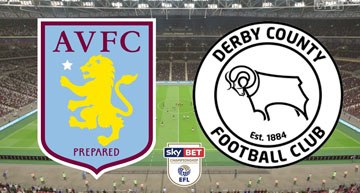 Aston Villa’s road to the 5th position was not that easy. Led by their firebrand forward Tammy Abrahams, their second leg of their season saw them collect maximum points from 10 of the last 12 games. This pushed them up 6 places, earning them the qualification to the play-offs. Of the two play-off finalists, they had a better landing, beating them both home and away; a total of 7 – 0. With them as the favourites of the game, they will maximize their superior season’s history with Derby County FC to propel them back to the English elite football tournament. They hope to erase the last season’s loss to Fulham at the play-off’s final and book the elusive ticket.

Their play-off match against West Bromwich Albion went down to the wire and had to be decided using post-match penalties. During their first meeting on 11th May, Aston Villa were 2-1 winners, but the return leg saw them fall 0-1. They won the shoot-out 4-3, setting a meeting Derby County for the Finals.

Derby County FC is the ambitious of the two finalists and had to fight for their place. The Frank Lampard men have lived to his bidding, and their steady growth is a fact to consider. They have won 20 of their 46 games played with their most prominent results of the season recorded at Prides Park against Rotterdam on 30th March. Harry Wilson has given them 15 goals in that respect, and their 6 place finish is credited to last 5 games where they collected 11 out of the 15 points. It should be noted that, despite their slim play-off qualification, they have cost some significant upsets in the season within the FA and EFL Cup, and should not be underrated.

Derby County pulled a dramatic comeback at Elland Road when they beat Leeds United 4-2 during their return leg of the play-offs winning 4-3 of aggregate. They might appear underdogs in the final, but this result has proven that anything in football is possible.

Aston Villa is still hoping that their talisman Axel Tuanzebe will be fit for the game. He picked a knock during their semi-final against Leeds, and as per the doctors, the defender is still under observation. Other than that, Dean Smith has all his key players on form, ready for the battle.

Tammy Abrahams will be pushing his goal tally upwards from 25 as he leads the onslaught with Jonathan Kodjia and Conor Hourihane in assistance. James Chester will lead the side, marshalling the defence as John McGinn, Albert Adomah and Anwar El Ghazi all available to start at Wembley.

Although Derby County has improved from their last season’s semi-final’s exit, they tend to better this by qualifying for next season’s premier league, an honour that has taken over 13 years to conquer. Scott Malone will miss the final after being booked in the Leed’s game. The injury list comprises of Martyn Warghon and Andy King.

Scott Carson is likely to start in the goal, while Fikayo Tomori, Richard Keogh and Jayden Bogle assume their regular position in the defense. Lampard is expected to retain the on-form Harry Wilson, Duane Holmes in the midfield and the front pair of David Nugent Jack Marriot will be tasked to bring the glory for the Rams.