The 2018/19 Europa League final comes to a close on 29th May when Chelsea and Arsenal square it out at the Olympic stadium in Baku, Azerbaijan. This is the second time the tournament is having English clubs in the final since its inception after Tottenham won the inaugural competition in 1971/1972 against Wolverhampton Wanderers.

Though familiar opponents in the domestic league, the London rivals have never faced each other before at any stage of the Europa League. Out of a total of 213 teams, only these two remain for the final showdown. Who will lift the handle-less, 15kg trophy?

LVbet gives a unique opportunity for extra winnings to their newly registered users. Upon successful registration, new customers are automatically registered to the promotion which gives them a boosted odds of 26.00 on Chelsea to win the Europa League trophy. This promo, however, comes with some important terms and conditions: 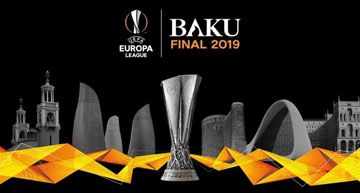 Chelsea qualified for the 2018/19 Europa league tournament after finishing 6th in the previous domestic league campaign. The Blues are making their second appearance in the Europa finals after their 2-1 victory over Benfica in the Amsterdam Arena. Maurizio Sarri’s men made through to the knockout stage after topping their group against BATE Borisov, PAOK and Vidi FC whom they drew against at Budapest.

Chelsea’s opponents in the round of 32 were no much either as they registered home and away wins against Malmo and Dynamo Kyiv. They proceeded to knockout Slavia Praha in the quarter-finals to set up a mouth-watering clash against ‘under-dogs’ Frankfurt. The semi-final lived up to expectations with penalties deciding the overall outcome.

The Gunners will be heading back to Baku for the second time in this tournament after playing Qarabag at the Olympic stadium during the group stages and just like their London rivals, they were top of the group. Arsenal was labelled as the ‘comeback’ team of the campaign after incredible results after defeats in the first leg in the round of 32 and 16 against BATE and Rennes respectively.

Unai’s men went on the produce a solid performance against Napoli in the quarter-final winning 2-0 at the Emirates and a 1-0 win in Naples after Lacazette’s sublime free-kick from 25 yards to book a place in the semi-finals against Valencia. After Arsenal’s first-leg victory, the tie was seemingly over before the second-leg at The Mestalla Stadium where red-hot Aubameyang scored a hat-trick to seal a 7-3 win on aggregate.

Arsenal has featured in the final before in 1999/2000 against Galatasaray when the tournament was known as the UEFA Cup which they lost 4-5 on penalties after a barren draw in Copenhagen. The Gunners previous first appearance in the Europa League final was brought to a halt by Atletico Madrid in the semi-final who went on to win the competition.

The stage is ready for the 10th Europa league final which promises to be nothing less than spectacular. For fans of football betting, goals galore are expected as it has been witnessed in the previous 9 finals with an average of 2.7 goals per game with Atletico Madrid recording the highest margin against Athletic Club (2012) and recently Marseille both winning 3-0.

Chelsea will be looking to continue their perfect scoring record in the tournament as they lead the scoring charts with 32 goals so far thanks to their main marksman, Olivier Giroud, who is currently the top scorer with 10 goals. Coach Maurizio will be missing two keys players in his starting 11, Rudiger and Loftus-Cheek who will be remembered for his hat-trick against BATE in the group stage.

Coming into this final, the Gunners boast of having a coach who won the competition a record 3 consecutive times with Sevilla from 2013/14 to 2015/16. Unai Emery is likely to field the same squad that played in the second-leg win against Valencia with Cech expected to feature for the last time between the sticks for Arsenal.

Apart from Bellerin who was injured earlier in the season, Unai has no injury concern, however, the club released a statement citing Mkhitaryan will not travel with the team to Baku. This comes in light of the ongoing political tensions between Azerbaijan and Armenia which might poses safety concerns for the player who is of Armenian nationality.