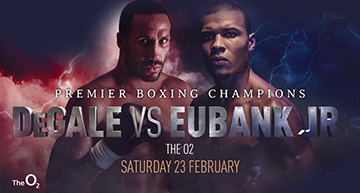 Another boxing spectacular is upon us, and Betfair has all of the betting odds for the event at the O2 Arena in the heart of London this weekend. The two super middleweights enter the ring with everything to lose. Neither fighter can afford to lose focus, and they will need to be at their absolute best to win. Somebody is retiring on Saturday; it is just a matter of who.

This fight has been on the cards for many years, and now it’s for real. James DeGale is set to face Chris Eubank Junior in a super-middleweight on Saturday 23rd February. Arguably one of Briton’s best middleweights, DeGale has failed to grab the headlines in the way other fighters have. It could be that he is actually a really nice guy and shies away from the limelight. However, it is more than likely to be poor exposure because James’s record says otherwise.

Clearly, DeGale – two-time IBF Champion – doesn’t get the credit he deserves for one reason or another but he does deliver an admiral commitment in the ring. Make no mistake, DeGale needs to win more than any other fight before. The usual pre-fight insults were flying, probably initiated by a predictable media advisor. However, at the weigh in, both fighters will get serious, especially James deGale because it’s all or nothing for him.

In the other corner, we have the younger, faster but noticeably smaller Chris Eubank Jnr. Compared to DeGale, Eubank Jnr – former IBO Champion – hasn’t really competed at the top level as much, and has been given this opportunity because if he doesn’t win, he’ll have nowhere to go. Eubank is a capable fighter who has fallen short of his father’s achievements. He looks every inch a menace in the ring. He’s fast and furious but unfortunately, he tends to fade. It’s entirely possible that this fight will put his light out for good.

On the undercard, you’ll be able to see the exciting British prospect of Joe Joyce against former WBC Champion Bermane Stiverne in a heavyweight competition. Stiverne is probably best known for his 12 rounder with Deontay Wilder, although Wilder KO’d him in the first round of the rematch. Like Anthony Joshua, Joe Joyce fought for Great Britain in the Olympics, and is destined to follow in Joshua’s footsteps. He needs to dispatch Stiverne convincingly to move himself up the rankings. Try not to miss this one; the vibe around the sport is that it’s going to be a blockbuster.