The Italian giants, Juventus are opening this year’s International Champions Cup campaign in a highly anticipated match against Tottenham Hotspurs. The faceoff will happen on 21st July 2019 at Singapore’s national stadium. Tottenham Hotspurs have not met with Juventus since last year at Wembley in the second leg of a Champions League match. Juventus won the game with an aggregate of 4-3. Since then, a lot has changed, including new signings to both teams. The Italians have strengthened their position in the football arena after bagging another domestic title. Besides, they recently signed Aaron Ramsey, Cristiano Ronaldo, and Matthijs De Ligt. 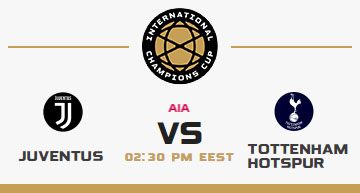 On the other hand, Tottenham Hotspurs have been doing great and showing tremendous improvement. They even made it to the Champions League’s final. The team’s formation has not changed apart from the addition of the French footballer, Tanguy Ndombele. Both teams will get the chance to display the prowess of their new signings in the ICC game. Looking at the history of the two sides, they have played against each other four times in the past ten years. In those matches, Spurs won once, Juventus have won twice, and a stalemate in one game.

In the head-to-head tournaments, the visiting team became the winners in a quarter of the total matches played. The home team has won half the times. Tottenham’s past does not leave much to go on. However, in recent years, the North Londoners have shown remarkable improvement through a smart-squad building. Their performances have been tremendous and have competed alongside international football clubs. Therefore, the match against Juventus is another opportunity for Spurs to earn a spot among the elites. For Juventus, the ICC tournament is the first step to regaining their glory after losing five consecutive games this year.

While Juventus will be going for the win, not all hope is lost for Tottenham. Spurs have a dedicated coach, and they are known to thrive in adversity. The odds from online bookmakers vary with 1xbet having the best odds for a draw of 3.62 and odds of 1.81 for over 2.5 goals and Dafabet have the best odds of 2.11 for goals under 2.5. The outright odds for Juventus to win are 2.16 by SBOBET while Bet365 have 3.50 odds for Tottenham to win.

Most bookmakers consider the match a sure win for Juventus given the history between the two teams. However, in the last few games, both sides have performed poorly with Hotspurs registering better results in the previous five matches. Also, Juventus won by one goal in their earlier faceoff with Tottenham. Therefore, while Juventus are aiming to get back on top, Tottenham has a score to settle.