NBA Finals 2019 Preview: Odds on Who Will Win the Playoff Series

The NBA Playoffs are held annually once the normal league season is over to determine the overall winner of the league. It takes the form of a knockout tournament in which each round is a best of 7 matches. The finals are now due to start on the 30th May and the Golden State Warriors will take on the Toronto Raptors. To get to the finals both teams have beaten three other teams in their individual best of 7 matches rounds. Golden State Bridge on the Western side of the conference beat Los Angeles Clippers 4-2, the Houston Rockets 4-2 and the Portland Trail Blazers 4-0.

Meanwhile, the Toronto Raptors took on the Eastern side of the conference and managed to beat all their teams, including Orlando Magic 4-1, Philadelphia 76ers 4-3 and Milwaukee Bucks 4-2. Both teams have had a thrilling ride to make it to the finals and they both look hungry for victory. The Golden State Warriors are the defending champions for the Playoff title, so this is set to be an exciting line-up, they will definitely be looking to bring the title home again. The next 7 matches (if it goes that far) will be some of the best basketball ever played. 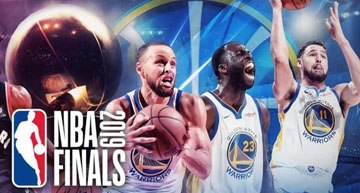 The matches will start on Thursday 30th May at 9 pm eastern time. The second game is due to be played on Sunday, June 2nd at 8 pm. From there, every subsequent game will be played at 9 pm, right up until the last one, which if it is necessary for it to be played will start at 8 pm. The subsequent matches will be Wednesday, June 5th, Friday, June 7th, Monday, June 10th, Thursday, June 13th and Sunday, June 16th. The last three games will only be played if necessary. If a team has already won using the best of 7 rules by the time it comes to them, they will not go ahead. Toronto has an advantage, in that 4 of the matches will take place at home for them whilst only 3 will be at home for the Golden State Warriors.

Which team do the bookmakers put as the favourite to win: Golden State Warriors vs Toronto Raptors odds

The Golden State Warriors are odds favourites to walk away with the NBA Playoff title. They are the defending champions and have won three out of four of the last title matches. They know what it takes to pull out a win and they look hungry to extend their championship haul even further. Toronto obviously have the home advantage in that 4 matches will be played on their own territory but the online bookmakers don’t think this will be enough to help them walk away with the title. They are also facing injury worries, with Kevin Durant being out of action for at least the first meet up due to a right calf strain. As one of their best players and favourite to win the MVP award, Toronto will certainly notice his absence.

Golden State Warriors vs Toronto Raptors: How the odds changed after the first game of the series

The Toronto Raptors managed to snatch a 118-109 win over the back-to-back NBA champions Golden State Warriors in a thrilling victory. It marked the first participation and first win in the NBA finals for the Raptors and also the first game being played outside the United States. The Canadians played incredible defence, limiting GSW to 30% shooting, and deservingly snatched a home victory behind Siakam’s 32 point eruption, All-star Kawhi Leonard two-way contribution and Marc Gasol’s all-around performance.

As far as the betting odds go, Toronto (@1.86) had a slight edge in probability over GSW (@2.00), but in general, both teams were placed at fairly even odds as the predicted winner of Game1. As a matter of fact, the early lines for Game 2 show that not much has changed in that regard – the Raptors hold a slightly better chance (@1.80) over the Warriors (@2.05).

But that does not change much as the bookmaker’s outlook of who will be the next NBA champion. Before Game1 the Golden State Warriors were put on 75% chance to win the series, a clear favourite over the Raptors. At time of writing and after Game1 loss, the best odds for GSW are @1.60 and for the Raptors @2.30 – are still considered the top dog in the series after a slight drop in probability from 75% to 63%.